Posts tagged Why Is the Moon Late?

These past two weekends, I’ve been at work on an illustration for a potential picture book project. The story, featuring two mourning doves, was drafted during a prompt for the Remarkable Monkeys on “Why Is the Moon Late?” 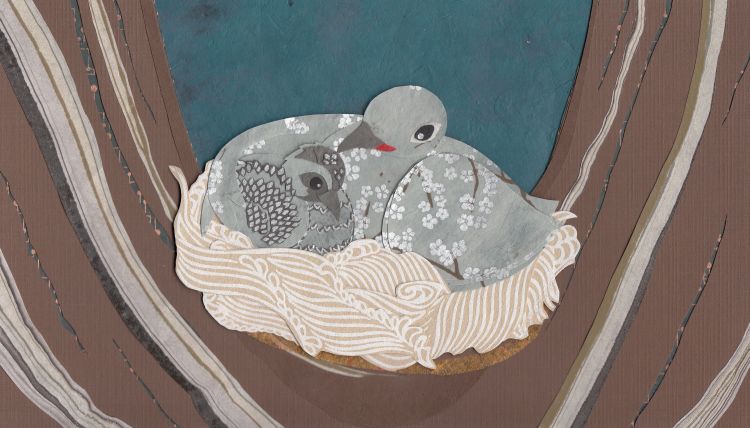 I started with a rough sketch. 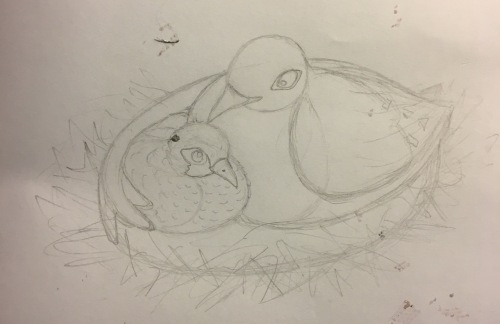 Next, I mapped out my layers, a highly scientific process where I use a lightbox to trace the general shapes from the sketch (e.g., head, eye with pupil, bit around the eyes, top layer of beak, underlayer of beak, etc.) on a separate sheet of white paper. I cut out those mapped pieces and used them as patterns for the fine paper.

By last weekend’s end, I had put together Little Dove, Mama Dove, and a version of their nest. It was a solid start but it wasn’t working yet, so I decided to let it sit.

Throughout the week, I returned to the illustration to consider changes. By the time Friday evening rolled around, I had a pretty good idea of what to do.

I remembered a talk Peter Brown gave where he said, “You cannot get the eyes wrong in a picture book. If you get the eyes wrong, you will have a problem.” It was clear that Little Dove’s eyes weren’t right. So, I pulled off his pupil, cut it down, and tried a few different placements. That was much better.

Then I added layers to the little guy, including a division between his breast and his mama’s, a tuft of down along his forehead, and lots of little feathers. Finally, I ripped up the nest and layered different papers over and under. At last, I was satisfied with my characters.

Because this scene is set at night, I needed a deep, blue paper for the sky. The week before, I had laid my birds and nest onto various shades until I narrowed my options down to three. 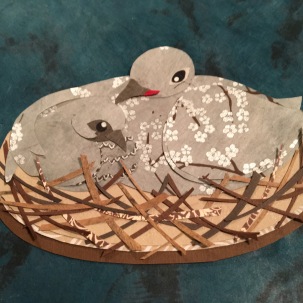 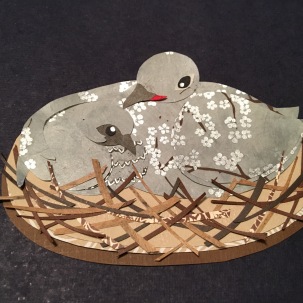 On Friday night, I tested them again with the revised doves, nest, and tree to make my choice.

For the tree, I started with a piece of plain, brown paper into which I cut wiggly lines to serve as grooves of bark. Then I cut and pasted other colors and textures on top. This step involved quite a bit of trial and error, hence the pile of cut-up squiggles on my desk.

Then I glued the sections together! 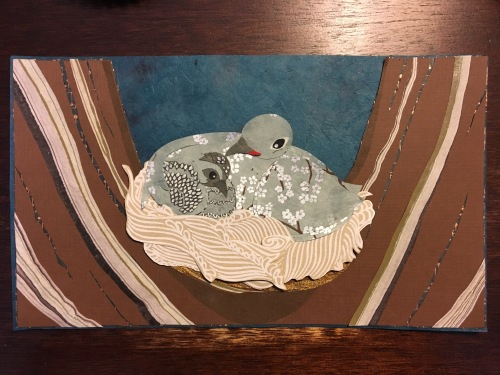 The final illustration is 9.5” across by 5.5” high. The collage was cut with my trusted EK Success Cutter Bee Scissors and adhered with an Elmer’s glue stick and PLUS’s 6mm-wide, honeycomb glue tape. I used the following papers, all from my beloved Paper Source:

It can be a challenge to scan a cut paper collage when there are multiple layers. While the colors are subdued, this one scanned pretty clean. A victory!